Hello and welcome to my TED talk.

When Ant-Man was first released in 2015, I immediately took a liking to the character of Hope van Dyne, played by Evangeline Lilly. Seeing as my other standout favorite lady boss in the MCU is Maria Hill (Cobie Smulders), I figured that I simply had a propensity to favor short-haired brunettes like myself. But something about Hope was different. I was drawn not only to her no-nonsense, steadfast determination for justice, but also to her pain, which was always so clearly just beneath the surface influencing every choice she made. She lost her mother, was pushed away by her father, and forced to the sidelines because of her gender. Despite this adversity, she rose above it all to forge her own path and never relented. Plus, her love interest was Paul Rudd, so yes please.

The end-credits scene of Ant-Man teased Hope’s transformation to take on the mantle of “the Wasp,” as previously claimed by her mother, Janet van Dyne. Further, when it was announced that Michelle Pfeiffer would be playing Janet, my nerd heart nearly leapt from my chest.

So with the Ant-Man and the Wasp only hours away from being the post-Infinity War palette cleanser we Marvel fans so desperately need, I recently took a trip on the Internet to find out more about Janet van Dyne. I soon thereafter descended into a rabbit hole, as the more I discovered, the more I absolutely fell in love with her. Although Lilly has been hailed by first reviews as a standout performance, reportedly Pfeiffer will play a very small (heh heh) part in the movie. And since Wasp is very absent from all Avengers 4 concept art and leaked set photos and Lilly herself said that she is hardly in the film, I am very worried about her fate post-Thanos’s Snap Heard ‘Round the Universe.

So although getting the Janet from the Marvel comics seems a distant pipe dream at this point, I still want to appreciate how awesome she is. Keeping in mind that I am about to concisely summarize many different comic book arcs of one character over six decades, here are all the reasons why Janet van Dyne, the Wasp, is my absolute favorite Marvel character. Period. 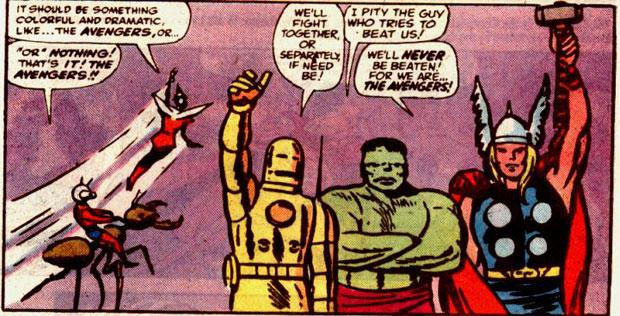 Something I was shocked to discover was that not only was Janet was a founding member of the Avengers, but she also came up with the name! In Avengers #1, released in September of 1963, the team made their debut, consisting of Iron Man, Thor, the Hulk, Ant-Man, and the Wasp. Though the MCU’s original Ant-Man and the Wasp are a generation older than our filmic Avengers core team (Thor excluded), it will be interesting to see the dynamic if/when the second-generation Ant-Man and Wasp (Scott Lang and Hope) join up with the core four in Avengers 4 (oh please oh please…).

Janet and Thor have many important interactions throughout their time together serving as the Avengers, and from these interactions blossoms a friendship that I absolutely adore. First, Janet openly flirts with Thor because…c’mon. It’s Thor! He’s a Norse god! However, this is done intentionally to make non-committal moron Hank Pym jealous (in this mini-dissertation, you will notice that I absolutely despise Hank Pym).

In a later Secret Invasion arc, Janet uses her size-altering abilities to such an extent in a battle against the Skrulls that she becomes a bio-bomb and straight up explodes. In a desperate attempt to lessen the damage, Thor uses his hammer to blockade the explosion and makes Janet vanish entirely, which utterly devastates him. Interestingly, Thor unintentionally blasted her to the microverse, an alternate reality that the MCU has renamed the “quantum realm” for copyright purposes. The quantum realm is where MCU Janet is to be rescued from, and might ultimately be the key to reversing the heart-breaking “dusting” that made all of us cry out at once, “I don’t feel so good” (sorry, I’ll show myself out).

As Thor has quickly become a fan favorite since his character makeover in both Ragnarok and Avengers: Infinity War, I would absolutely melt if Hope had even an ounce of the friendship comic book Wasp has with Thor. It’s truly adorable. 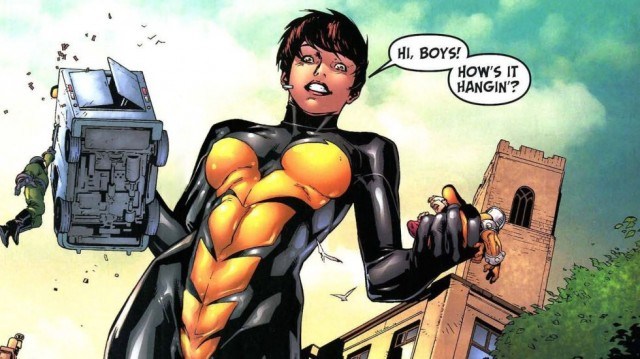 When Janet was first introduced as a cohort of Hank Pym/Ant-Man in 1963, she uses Hank’s “Pym particles” to shrink and sprout wings in order to track down the alien force that killed her father. After her quest for vengeance is satisfied, she chooses to remain the Wasp, but in only a few short years, her body has advanced to such a degree that she no longer needs Hank’s invention to shrink, shrink, she just does it herself!

Further, remember how Ant-Man can also grow in size, becoming Giant Man? Guess who was the first to grow? That’s right– Jan with the Plan. Take that, Hank.

Admittedly, Janet is often depicted as a product of her time and is mainly at the mercy of male writers. As such, she seems to be a walking contradiction; sometime’s she’s shockingly progressive for the era she was created, and other times she seems to take feminism several steps backward. This is mostly in her relationship with men. She becomes romantically entangled with most of the guys she works with, including Hawkeye and Tony Stark (though she ends her affiliations with the latter once she discovers he is also Iron Man and that’s a conflict of interest. So in other words, Janet is Human Resource’s dream).

That said, through all her relationships, Janet is never solely reliant on a man, especially regarding the one who started it all, Hank Pym. This guy… To put it bluntly, homeboy is problematic as hell. Not only does he lead Janet on for years, he also gets selective amnesia and dons an alter ego of Yellowjacket, who forcibly marries Janet, which is um…really bad. After going through this ordeal, he also creates Ultron and nearly destroys the world, and subsequently takes out his insecurities out on his wife, berating her, controlling her every move, and physically abuses her.

So what does Janet do? LEAVES HIS SORRY BEHIND. Even when he proposes to her again later on, she still kicks him to the curb.

LOVE. THIS. WOMAN. Which leads me to my next point… 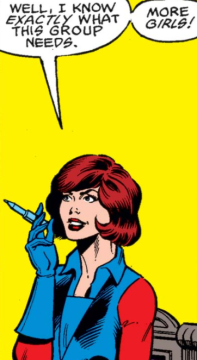 Janet consistently outsmarts her male counterparts, coming in clutch at the last-minute to save the day. Not only is BAE the sole female founding member of the Avengers, but she later goes on to form the Lady Liberators, which I think is one of the coolest team names ever.

Though we saw one of those strange arcs of regression in the late 80s, where Janet inexplicably steps down from the Avengers and moves to the Avengers West Coast team as just a reserve member, as well as reconcile with Idiot Hank (booo…), the 90s saw a resurgence when she returns to the Avengers and increases membership so that women outnumber men in the team. Her invitation also sees the welcoming of important figures like She-Hulk and Captain Marvel.

Finally, when Janet is shunned to the microverse/quantum realm, she briefly becomes the last living woman on Earth, because literally nothing can stop this woman, not even the apocalypse!

Our first taste of Janet’s leadership skills comes immediately after divorcing Hank. She basically does some soul-searching, then comes barging through the doors of Avengers HQ like, “Whaddup, y’all? I’m your leader now,” to which bestie Thor, Iron Man, and Captain America (who regularly cites her as the best leader among them) unanimously vote her in.

Janet serves as the Avengers’ chairperson for a good deal of the team’s existence. When she returns to the team in the 90s, she presides over not one, but three different eras’ worth of Avengers when three different timelines of characters intersect and doesn’t break a sweat.

Janet is a fascinating blend of art and science. Her occupation is a fashion designer, yet she is surrounded by scientists, be it via her superhero friends, her husband, even her father. As a result, she revolutionizes her own powers, inventing the “Wasp sting” which helps fend off her opponents.

Using her fashion background practically, she also designs effective superhero apparel for her friends. Someone get her and Shuri in a room together…

She further designs a sort of Bat Signal to warn Avengers whenever there’s danger no matter where in the world they are, and also casually privately funds the Avengers out her own damn pocket! Isn’t she the best?

All of this said, the MCU is about to get not one, but two Wasps. No matter how small of a role the actual Janet van Dyne will be in the upcoming film, there is hope…in Hope! Evangeline Lilly has said that though the idea of a female Avengers film is something she is pushing for and that her character is undoubtedly a feminist dream, she thinks that Hope would be the perfect right-hand woman to Captain Marvel, whose solo outing will debut in February. I am interested to see if the early reviews of Ant-Man and the Wasp that praise Hope’s character will warrant more subsequent appearances in future Marvel movies, and if perhaps more of Janet’s comic book arcs can be incorporated later on.

Here it is, folks! My Halloween costume for the year! I am Hope Van Dyne from Ant-Man, complete with my very own tiny Ant-Man! Look for more Halloween shenanigans this afternoon!

Regardless, Janet van Dyne as she exists on paper is, I believe, one of the strongest characters the Marvel cannon, and if the MCU infuses even a third of her badassery into their movies, it can only be a step in the right direction.