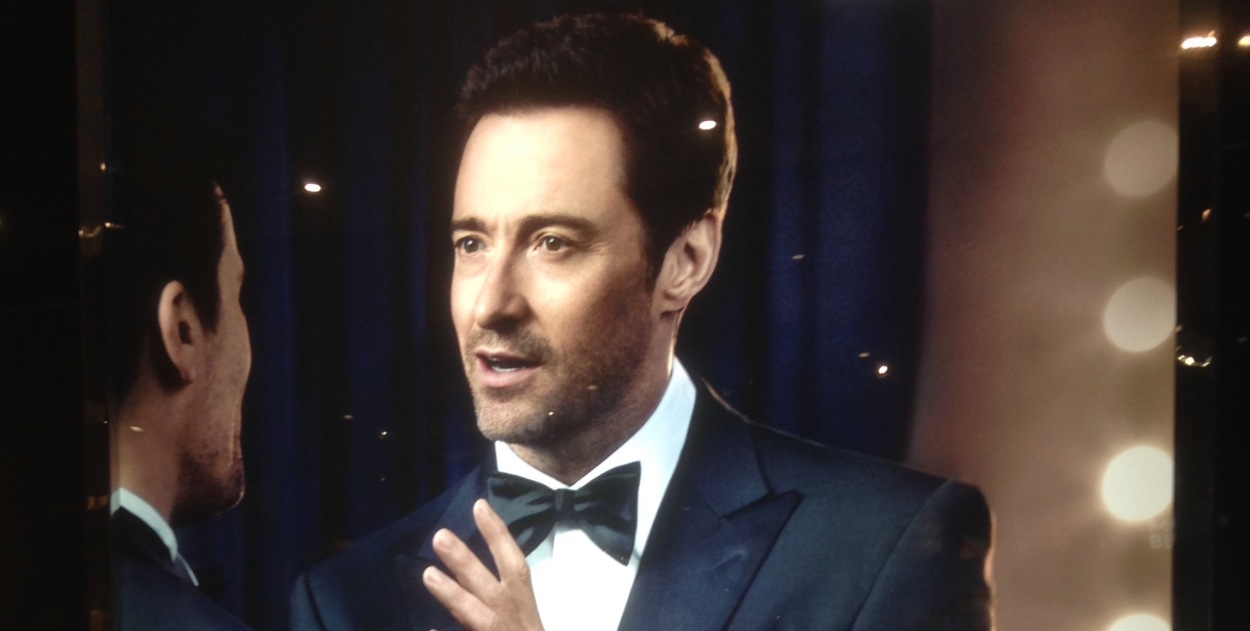 SPOILERS, FOOLS. Keep your bloody adamantium claws off this page if you don’t want Logan to be utterly ruined for you.

Welcome to the second installment of my “All the Times I Wept” series. This blog could also be subtitled, “Need a Hug After Seeing Logan? C’mon. Bring it in.”

Okay. It’s been a a few days, and I am just now ready to talk about Logan (Mangold, 2017). I genuinely thought I was ready for another Wolverine flick, and especially with all of the production’s promises to be edgier, grittier, and more emotional than anything that we’ve ever seen before in the Marvel X-Men Universe. Plus, one of my very favorite actors and League Member #3, Hugh Jackman!

Boy, was I wrong.

It’s hard to be a severe emotional empath and also be a student of film. As a film critic, one should be able to separate themselves from the manipulative techniques used by the filmmakers to influence their audience in order to more objectively judge the quality of the film. However, every time, I have utterly failed in this endeavor. If there’s a well written and performed character in either a massively happy or sad circumstance, I’m a goner. Cue the water works.

So, I was left with the position to use this quality of mine. And hey, now I know that if a movie gets me, at least it was successful in creating a great emotional charge through good writing, powerful images, swelling music, an authentic performance, or some combination of the four.

This was the greatest strength of Logan, and I want to break down the specifics of all the times I wept here:

Professor Charles Xavier, whether in Patrick Stewart or James McAvoy form, was always a consistent badass. It didn’t even matter if he was constricted to a wheelchair – it was Charles’s incredible intelligence that was always the glue that held each particular X-Men team together. He was the heart and soul of each film.

So seeing him weak, slowly losing his mind, and spending a lonely existence in a toppled-over tank was heartbreaking. It’s a sight most everyone can relate to; Many of us have watched the decline of physical and mental state of someone who at one time was a strong, healthy, powerful person. It’s a scary thing to witness that reminds us of the frailty and impermanence of life. I heard audible cries of pity in my theater when Stewart whimpers out the line, “You’re just waiting for me to die,” in his first scene of the film. Gut-wrenching.

Charles experiences seizures when he doesn’t take medication, and his powerful mind adversely affects all people and things around him when these attacks happen. The film alludes to, but never explains well, that one of these attacks apparently killed some of the other X-Men? I don’t know? I’d watch it again, but then again I am not interested in putting myself through more emotional trauma, thank you.

Anyways, one of these attacks occurs in a busy hotel, rendering all guests and employees within temporarily paralyzed. After Logan and Laura successfully inject medication into Charles, thereby stopping the attack, they flee the hotel, wheeling Charles through the wreckage. Seeing what his mind has caused, Charles, in tears, cries out, “I’m sorry,” to shell-shocked patrons struggling to recover. Once again, P-Stew’s performance got me bad. He is powerless to stop the damage he creates, and is just as powerless to help fix the consequences.

Dammit. Nothing happy can ever last in this movie, can it? An innocent, nice, happy family welcomes Logan, Charles and Laura in for dinner and an overnight stay. This leads to two separate groups attacking the farm and the members of the family all are killed in the process. And let’s not forget the most horrible moment; Charles remembering that his uncontrollable actions destroyed the X-Men (once again, still not sure about this. It was rather lazily thrown into the dialogue), but saying aloud that this night he, Logan, Laura, and the farm family spent together was absolutely perfect.

Then what flipping happens? Charles gets to watch LOGAN HIMSELF STAB HIM WITH HIS CLAWS. We quickly discover that it’s not Logan, but a replicated model named X-24 (also played by Jackman) created by Transigen, but that’s what Charles gets to see before he dies: What looks to be his ally stabbing him through the chest on what was, “the best night in recent memory.” And to make matters INFINITELY WORSE, as Charles dies, Logan keeps whispering, “It wasn’t me. It wasn’t me,” and it’s never clear if Charles actually hears him. Kill me.

Charles dies in Logan’s arms, but not before whispering, “The Sunseeker,” the boat that Logan was planning on buying for the two of them to live out their days in peace aboard.

…I was wrecked (no boat puns intended).

Hugh Jackman is an incredible performer. The first movie I ever saw him in and what ultimately led me to consider him for League inclusion was Les Miserables (Hooper, 2012), where he’s practically sobbing in every scene he’s in. So watching him as Logan, the Wolverine, the unbreakable, unkillable force who’s as tough as nails, struggle to hold back tears as he buries Charles, was incredibly tragic.

So in the climatic final battle, Logan takes all of the medicine which makes him completely heal and charge into battle with incredible strength (a moment which rendered cheering in my theater), but once the medicine quickly wears off, he’s weaker than ever. It was so hard throughout this entire film to watch the self-healing, 200 year-old mutant struggle with physical ailments, but this particular moment evoked so much pity.

I also want to take a moment and compliment the makeup on this film as well. I actually found myself extremely concerned for Jackman’s well-being during Logan; I legitimately thought he was just as haggard and exhausted as his character appeared. It wasn’t until X-24 appeared that I was reminded how Jackman really looks currently, which is stronger than ever. Good god, man.

I was waiting for this moment for the entire film. Yet when it happened, I was NOT ready.

Father-daughter relationships in film and theater are some of my favorite dynamics to follow. It’s just such a unique bond that ranges between protectiveness, love, fear, and pride. I was not expecting Logan to take the father-daughter route, despite the trailers making it clear that Laura shared Logan’s DNA. I thought that it would be more of the “she’s a clone,” sort of relationship between Laura/X-23 and Wolverine in the comics. So when Logan surprised me with the former alternative, I was so much more emotionally invested in their bond.

Watching Logan and Laura’s progression throughout the film from strangers to parent and child was a beautiful, well-paced transition. And as Logan, impaled by a tree branch, lay dying in his daughter’s arms in Canada, the country of his origin, my heart exploded in my chest as Laura cries out, “Daddy!” as he takes his final breath.

This was when I started sobbing.

Laura and her next-generation mutant team bury Wolverine (by a lake, just like Charles. #Rekt), and honestly, I was ugly crying so hard and trying so hard to keep my sobs inaudible that I didn’t hear Logan’s final words or Laura’s eulogy. I know it was a quote taken from the 1953 Western film, Shane, that she and Charles were watching in the hotel room earlier in the film, but I maybe heard a total of three words of her speech.

As they walk on towards freedom, Laura stays behind. She pulls the cross out of the ground that the children have fashioned together. She then turns it slightly and places it back in the earth, forming an “X” as Logan’s headstone.

I couldn’t breathe. Honestly, as I’m typing this out tears are in my eyes again. For a movie that was generally excessively long and not very well written in terms of plot, this last five-minute sequence utterly destroyed me.

As I watched the finale of the film and the credits rolled, my sobbing was also influenced by the reminder of why Logan had to die. This was Hugh Jackman’s last time as Wolverine (shut up, Ryan Reynolds. I know you want Hugh in the Deadpool-verse, but let the poor man rest). X-Men (singer, 2000) was Jackman’s first film role ever. It’s what made him a star. It was investigating the X-Men series that convinced me to include him in The League. He played the role for 17 years. His final scene on the film was his final scene as the character – his death was the last time he’ll ever play Wolverine (once again, shut your mouth, Ry-Ry).

In fact, there were no additional shoots after the reshoots of the rewrap. So that's a wrap! Makes sense to me. @logan @20thcenturyfox pic.twitter.com/6tefP7xa8V

It’s a good thing, though. Hugh throws himself body and soul into every character he plays, sometimes with very dangerous outcomes. He’s had many health scares recently with skin cancer, and he’s nearing 50. As a fan, I’m worried about him, and if that means him taking a breather on the crazy stunts, that’s fine by me. However, that doesn’t mean that it hurt any less to see him turn in the claws. All good things must come to an end though, and even though Logan was a pretty average film with some very big flaws, what a way for a nearly 20 year-old career as a single character to go out. I bet Hugh is incredibly proud.

As I stated before, it is highly unlikely that I will be watching this film again anytime soon, if at all. Making Professor X and Wolverine mortal and ending their cinematic lives were hard reminders about the fleeting nature of human life, and made me draw parallels to not only people I know, but also people I don’t, nor probably ever will. I’ve talked before in this blog about why celebrity deaths can affect fans so adversely, but this movie emphasized a fear: We live with these characters and the people who play them temporarily. We see them only a few hours at a time, a few years at a time, but in that moment they make us feel real emotions, and we connect to the humanity they express. They don’t know us, and therefore cannot judge or hurt us. We don’t really know them, so we never see their flaws.

Logan and Jackman made me feel throughout ten films and five years, and some were there for all 17 years of this character’s life. So when Logan died, we too lost a friend. We lost a hero. Despite being fictional, for about twenty hours of our lives, Logan was real, and now he’s gone.

That’s my eulogy for Logan, James Howlett, the Wolverine, Hugh Jackman’s very first film role, or whatever you want to call him. Overall not a great film, but damn did it bring the feels.