Because "a day without laughter is a day wasted"

I had a very clear idea of what my Sunday was going to be like upon awakening. Little did I know that it would soon become solely about fangirling over what else, Pirates of the Caribbean.

The original plan was to finish watching the 1960 version of The Magnificent Seven, go shopping, do some busy work, then head out for a double feature of Miss Peregrine’s Home for Peculiar Children and the remake of The Magnificent Seven. That’s when my roommate, eating breakfast beside me on our couch, let out a low, guttural guffaw as though she had been punched in the stomach by a MMA fighter. Just as big of a Pirates fan as I am (if you need reference to my fandom, please see previous blogs found here and here…and here), she shoved her phone in my face, which was playing the following message:

Something lurks beyond the waters… ☠️🌊 Get a first look at #PiratesOfTheCaribbean: Dead Men Tell No Tales during Fear The Walking Dead tonight at 9/8c on AMC.

…which prompted us to do this…

That’s right, m’lords and ladies, the moment I have been waiting years for is here at last, and we’re getting a first look at Pirates of the Caribbean 5; Dead Men Tell No Tales!

As I write this post, I am about three hours from…whatever Disney has in store for us during one of the commercial breaks of Fear the Walking Dead’s Season 2 finale on AMC. So while the basic structure of my day remains unchanged, it has undoubtedly gotten far more interesting.

I have mentioned this in other posts, but whereas I might claim having a fandom for any variety of nerdtastic shows and films (The Walking Dead, Sherlock, Bates Motel, The Marvel Cinematic Universe, and all things Disney, to name a few), since I was eight years old, Pirates of the Caribbean has captured my imagination, and was the first series of films to make me truly love cinema. As I have stated before, they are not without their flaws, but overall, they hold a special place in my heart.

It has been nearly ten years since my favorite installment, At Worlds End, was released, and five since On Stranger Tides came out. I was at the first announcement that Orlando Bloom would be reappearing in this film, and have eagerly been searching for any shred of evidence about what the next film will be about (…still hoping for a Norrington cameo…please Disney…please…). Until the teaser can (hopefully) give us some more clues about the narrative, let’s take a look at the poster, which was formally released this morning: 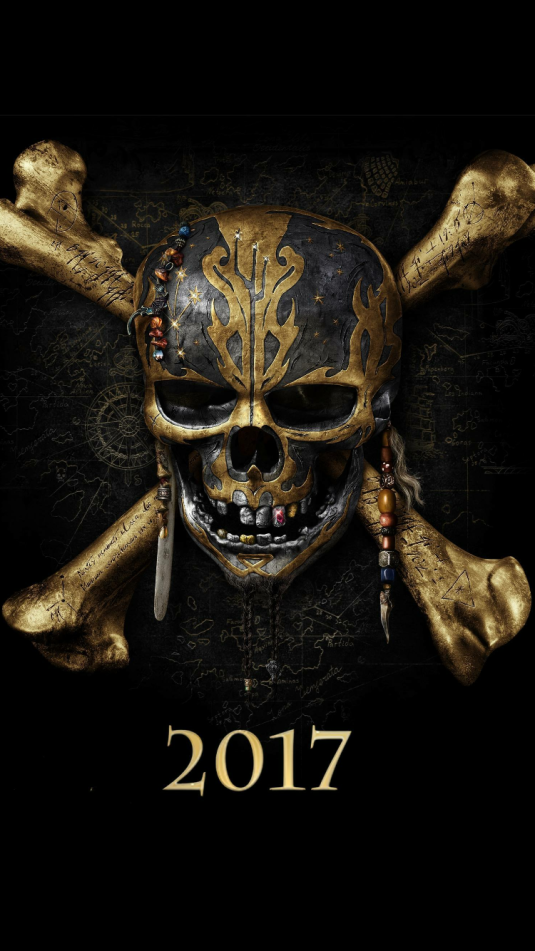 This logo is a little interesting. First of all, it looks very similar to the logo of At Worlds End, which featured the classic Jack-like skull atop two crossed bones. This design was meant to mimic a skull and crossbones flag, a common object seen in the third film. This design also varied from Curse of the Black Pearl (skull atop crossed swords), Dead Man’s Chest (skull atop crossed torches), and On Stranger Tides (same logo as Curse of the Black Pearl, only completely silver). This design is silver AND gold, but is additionally jewel-encrusted and has carvings that are illegible to my eye as of now. Here’s what I was able to decipher/speculate wildly about: 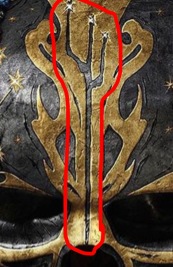 For months, the Disney Company has claimed that the storyline would be about Jack and his respective villain (initially Christoph Waltz as Captain Brand, now Javier Bardem as Captain Salazar) hunting for the Trident of Poseidon. The new logo seems to be sporting a symbol that looks an awful lot like a trident running right down the center of the skull’s forehead.

Other early rumors discussed a plotline regarding the Bermuda Triangle. Upon closer examination, this appears to be the very thing that the poster is trying to suggest as well. Could we be travelling into that seafaring folklore in this film?

Unless it is merely an aesthetic choice, this poster art is the most chart-like of the previous four films, with a subtle map background beneath the main logo, as well as very specific placement of jewels on the skull’s forehead, which gives me the impression of a star chart. Will navigation by star patterns play into the narrative of Dead Man’s Chest?

To me at this time, the inscriptions are rather unclear from what I have been able to see online, but I can only make out one full word from the carving on the bone on the bottom left hand corner of the poster: “Isla.” The phrase is clearly in Spanish, but I can’t and won’t be able to make out any other words until I can either access the poster physically or in a higher definition.

Until then, I must wait for three more hours to get answers to my many questions about the plot of Dead Men Tell No Tales. I know how incredibly sad I must appear, but don’t blame a fangirl for fangirling!

I’ll see you all in Part 2, once I have emerged from the other side of this exciting nerdtastic Sunday afternoon!