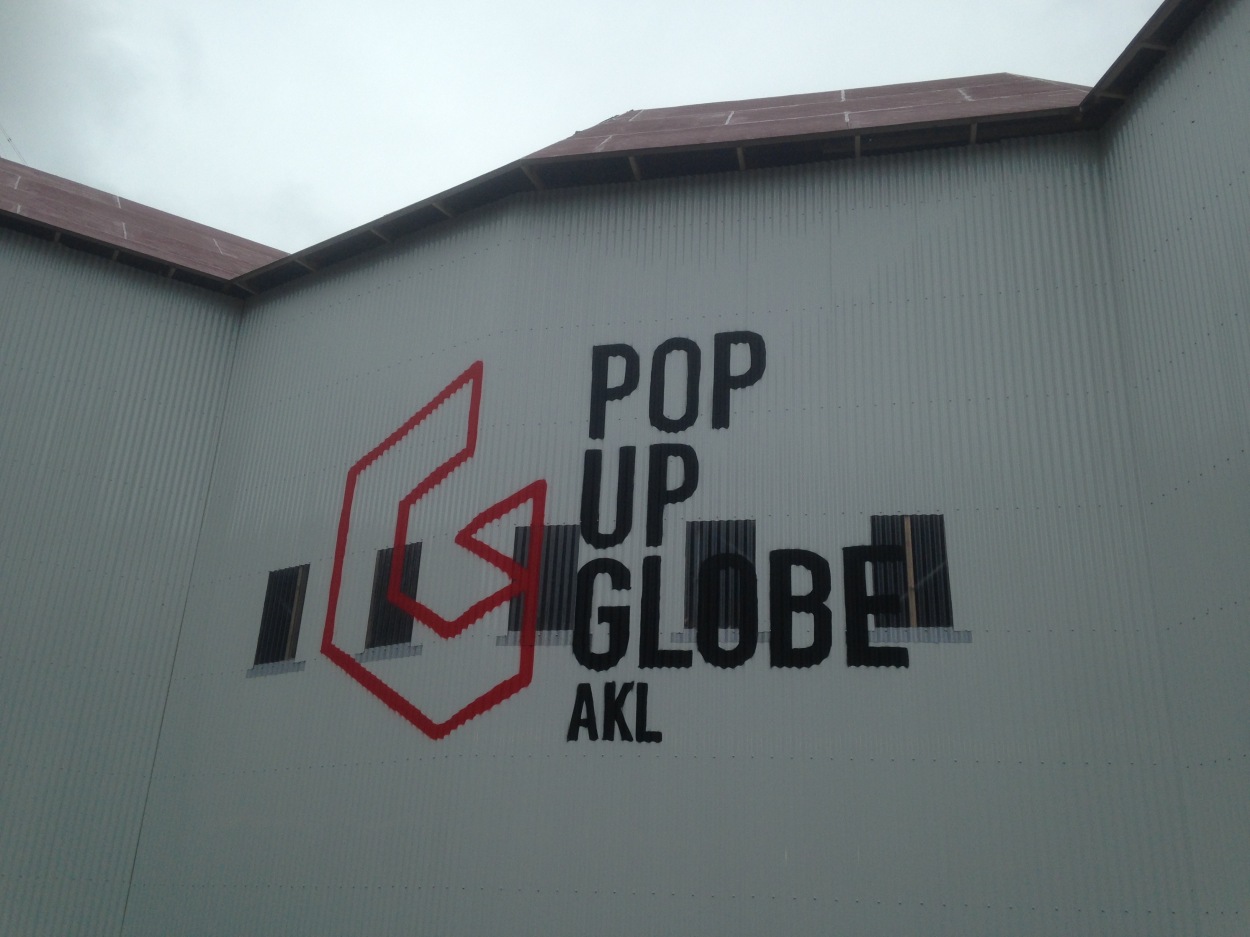 This past summer, the city of Auckland, New Zealand celebrated the 400th anniversary of the death of William Shakespeare in a very unique way – by building an exact replica of the second Globe Theatre and putting on a series of tours, workshops, and Shakespeare-penned productions. 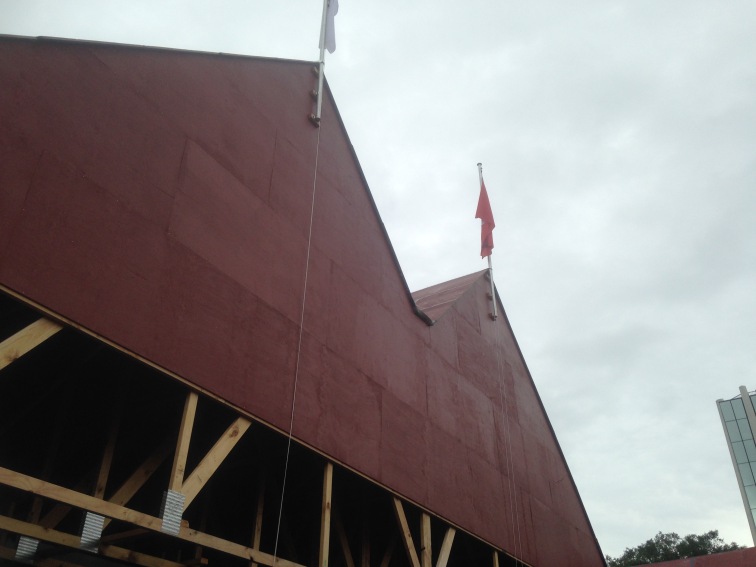 This was an effort conceived by Professor Tim Fitzpatrick and Mr. Russel Emerson of the University of Sydney, who performed extensive research on the construction design and dimensions of the second Globe. The first Globe was burned to the ground at the hands of a stage fire, soon to be replaced by the second in 1614. However, in 1644, all theatres in England were torn down by the Crown’s Puritan administration.

Plans to rebuild the Globe in London (modeled after the original design of the first theater) began in 1949, but weren’t completed until 1997 when it was opened by Queen Elizabeth II. Several Globe replicas have been constructed in Argentina, Germany, Italy, Japan, and the United States, but all of them still retain plans based off of the first Globe.

Auckland’s temporary summer theatre playhouse, known as “Pop-up Globe,” was the first to replicate the second Globe’s designs, constructed in a parking lot entirely out of recyclable material.

Shakespeare’s works were certainly well represented: The Pop-up Globe Theatre Company put on two shows, Twelfth Night and Romeo and Juliet, Young Auckland Shakespeare Company put on Much Adoe About Nothing (1623 spelling), SHAKEITUP!/Sharu Loves Hats produced Henry V, the Auckland University Student’s Association Outdoor Summer Shakespeare Trust put on The Tempest, Fractious Tash presented Titus, Byrnes Productions/Unitec put on Antony and Cleopatra, and The Lord Lackbeard’s Touring Company produced Hamlet.  There were over 80,000 tickets sold throughout the season, which ran from February to May, and a petition was signed by over 600 people advocating that the Pop-up Globe becomes a permanent Auckland attraction.

So here’s some quick reviews of the three productions I had the opportunity to see, all of which were viewed from a Groundlings perspective…like the broke college student I am! 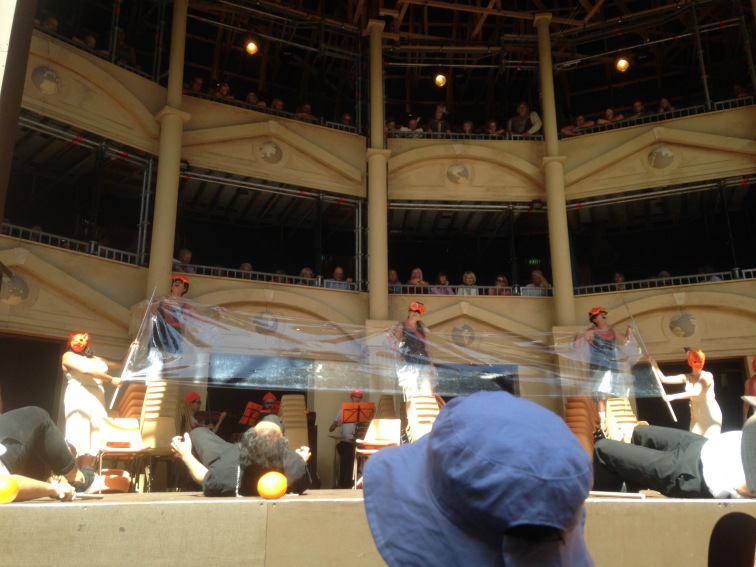 This production was very intriguing! I had never seen The Tempest Before, but it was very cleverly staged. The play opens on a shipwreck, which was suggested by the players creating a spiderweb-like formation with large ropes, pulling one another chaotically across the “deck” of the stage. Gender neutral casting was used, with most notably a female Prospero, who was played with such finesse that the change was barely noticeable. The character of Ariel was split amongst three actors, which was effective in increasing the sprite’s aura of mystery and unpredictability.

The color scheme was mostly neutrals, but with a pop of color of either orange or purple, and all music was created live with three onstage musicians and the vocals of the actors. The one confusion I had was particularly around the use of modern songs that were inserted into the narrative, primarily the inclusion of Daft Punk’s “Get Lucky,” during the wedding scene, which created a bout of laughter from the audience which I wasn’t sure was the intended effect. Overall however, the show was visually very intriguing and generally well presented. 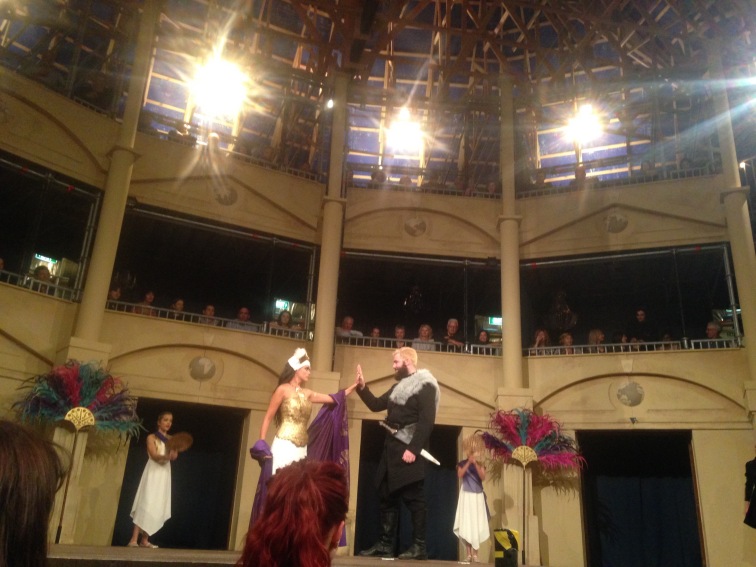 Antony and Cleopatra was once again another Shakespeare show that I had yet to see performed live, and was by far my favorite of the Pop-up Globe shows that I saw! This production was directed by Vanessa Byrnes, and in her director’s notes, she makes it clear that she took liberties with the plot, particularly making Dollabella and Alexas into mystical beings that represent Rome and Egypt separately. Rome and Egypt were each represented by stark contrast in costuming: the Egyptians can be seen in loose-fitting white and gold garments with either dark or red hair, while the Romans are in form-fitting, martial black and silver costumes with bleached blonde hair. 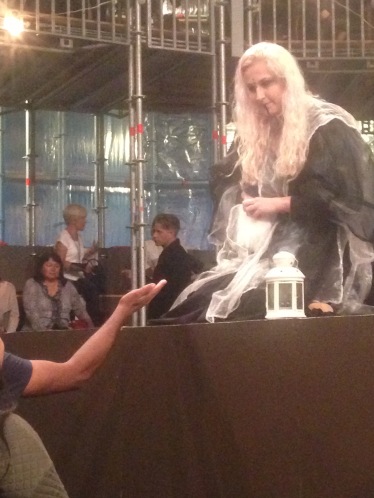 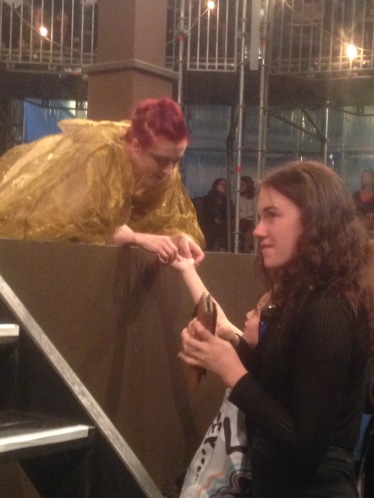 The show began with Dollabella and Alexas wandering the stage, murmuring incantations, burning incense, and giving palm readings to some of the groundlings. The show began as they each turned over a sand timer, one for Egypt and one for Rome. These timers represent the time Antony and Cleopatra have left to live from the start of the show until they each meet their tragic ends. Somehow, the timers’ sand ran out exactly on time, the precision of which is something I still can’t fully comprehend!

While overall the acting was quite admirable (particularly in regards to the chemistry between the titular characters), the second act felt rather heightened and over-emotional, which made it hard to connect to the actions playing out onstage. However, the production elements were impressive enough to render that a nonissue. 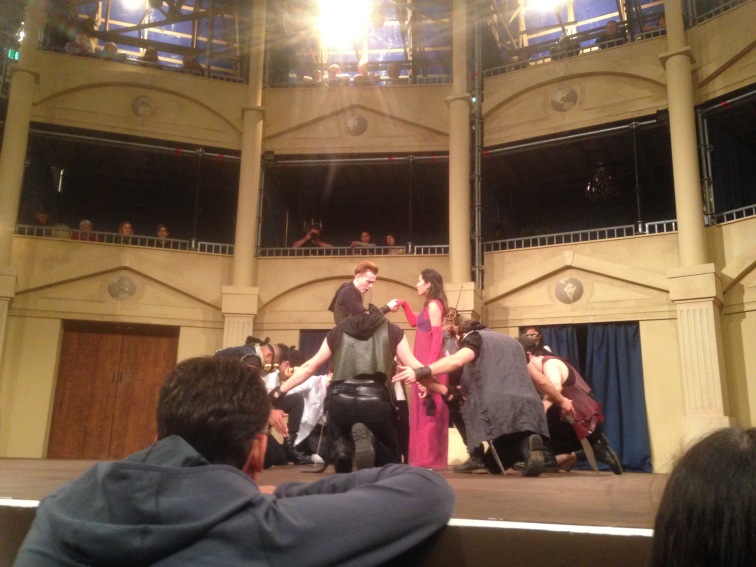 Honestly, I’m not certain that there’s anyone out there who hasn’t heard the story of Romeo and Juliet in some form or other. I personally have seen three productions, two films, and have had to read it several times, so I was skeptical about how this production would hold up as compared to other incarnations of it I had seen.

It was generally quite good. The first act was very funny, as it is written, but sadly the shifts between comedy and tragedy were very sudden and jarring. The double casting of characters such as Mercutio/Prince Escalus and the Nurse/Lady Montague, while economical, took my attention off the narrative and was just a little too distracting for my taste. However, the fight choreography was easily the strongest part of the show, featuring rapid, energetic movements, hard falls, and blood.

So much blood in fact, that most of Tybalt’s “DNA” ended up accidentally drenching most of the stage left groundlings. I had stage blood in my hair, all down my arm, and somehow inside my shoe. I fared better than the poor girl in the white hoodie standing in front of me, however!

Overall, I was so thrilled to have been a participant in the experience that was the Pop-up Globe theatre, and although I am not a permanent resident of Auckland and therefore shouldn’t get a say in what the city does with its land, personally I can’t help but wish that the Pop-up Globe loses its “Pop-up” status and becomes a permanent attraction within the CBD. It would just be one more thing to love about an already incredible city!

And with that, I must bid thee farewell! Parting is such sweet sorrow!