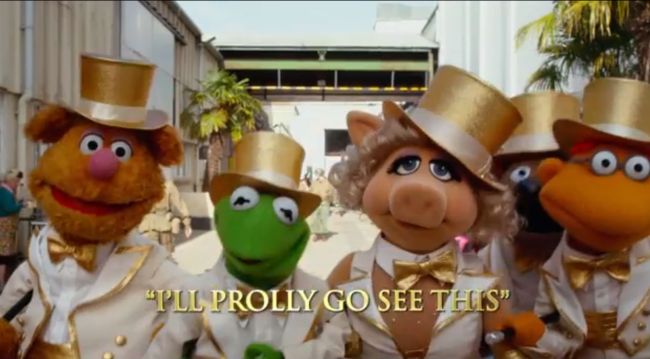 So did the sequel disappoint me? Well, consider this: I don’t like the Muppets. I LOVE them. And I didn’t use to. This was when I was going through my “I’m too old for that” phase. I thought they were made with a younger audience in mind–a branch off from Sesame Street. In some ways, they are. But what I didn’t realize how universal an all-encompassing they are in terms of humor and entertainment value. How did I discover this? Los Angeles.

For my birthday in 2011, I traveled to Los Angeles, a place I had always dreamed of seeing. Sure, I had landed in the airport many times, but I never really got a chance to “experience” the city. Well, we stopped and had a hot dog at Pink’s, saw some Hollywood Stars, avoided a scary-looking Batman posing nearby with a knock-off Minnie Mouse, saw the Chinese Theatre, and ironically passed Jim Henson’s Studio. But the finale of the star-studded day? I wanted to see a movie in the Disney-owned El Capitan Theatre and hear the musical sounds of the Wurlitzer Organ before the film began. We had travelled at an awkward time of the year. We had just missed Halloween, and therefore the 3D re-release of Nightmare Before Christmas, and we were too early for a screening of The Lion King. What were we left with? The Muppets. I was disappointed to say the least, but being in the theatre at all was entirely worth it.

Like I said, I knew little to nothing of The Muppets. I had seen the 3D show at Disneyland a few times or a commercial appearance by Kermit here and there, but not much else. All I knew was that Kermit was that frog that occasionally appeared on the Macy’s Thanksgiving Day Parade in either balloon form, or literally, usually with his banjo, singing “I Believe in Santa Claus,” and that Miss Piggy annoyed the hell out of me. But there I was, in that theatre, ready to watch their movie–the first reboot in YEARS. The organist was incredible, and when the lights went down and he disappeared into the floor, I couldn’t help but feel a little disappointed that The Muppets was the film that was going to follow up that magic.

The movie begins. I am dumbstruck. Not only do I see incredibly familiar faces, (Jason Segal, Amy Adams, Chris Cooper, Alan Arkin, Emily Blunt, Jack Black, Rashida Jones, Jim Parsons, and many more celebrities), but I was taken aback by the Broadway-worthy musical numbers and spot-on humor. This wasn’t all though–every location The Muppets went to, we had experienced that day. Pink’s, Jim Henson’s Studio, the Chinese Theatre, Hollywood Boulevard itself, and the El Capitan, the self-same theatre we were sitting in, was all featured. INCREDIBLE. I entered the theatre a resentful and disappointed, but left a full-fleged Muppet Maniac! I was singing the songs, reciting lines, and (unbelievably), I couldn’t wait for my vacation to end so I could go back to cinemas and see it again (and I even started to like Miss Piggy!!).

Turns out, everyone had this sort of a reaction. After I saw the film was when I discovered that Jason Segal had manned this project nearly entirely on his own, finding co-writers, a director, reassembling the puppeteers, and organizing cameos. The movie did amazingly well in theatres (thanks in no small part to me. All told, I think I saw it four times). I soon had the complete collection of the Muppet television shows. I was turning into a Walter myself, a loyal and devoted fan. And you can bet that I was cheering when Bret McKenzie won the Oscar for “Man or Muppet!”

Then what happened? You need not look any further than my blog from a few months ago, “Welcome to Sequel-Ville; Population: Too Many.” Disney wanted to capitalize on the film’s success, so–OUT COMES A SEQUEL. Almost as soon as the sequel’s plans were announced came the shocking news that Segal would have no part of it, stating that he had fulfilled his mission in bringing the Muppets back to mainstream pop culture, and that his job was complete. This was a blow. Jason was half of the writing team, and his style of comedy is very unique and, even more importantly, extremely hilarious. The only solace in this news was that Nick Stoller, James Bobin, and Bret McKenzie would return to lead off directing, writing, and music. I still had hope.

Fast forward to August, 2013. I am sitting in the audience of the upcoming live action announcements at the D23 Expo. Up comes “Muppets Most Wanted,” and along with it, Ty Burrell in a tiny car. He gets out, talks for a bit about the movie, then gets back in and zooms offstage. Then the audience got a sneak peak of Ricky Gervais’s song “I’m Number One,” and the first trailer. I thought it looked hilarious! The audience was in stitches at Tina Fey’s joke, “Lights out! Turn them back on, I can’t see anything!” I was once again completely enthralled by the aspect of a Muppet sequel.

The trailer starts to go viral. I see it in theatres and relive the humor with an audience entirely new to it, and I am still stoked! But then…it’s all over the Internet. And TV. Every. Damn. Commerical. Break. My excitement fades as quickly as it is kindled. Soon, I know the trailer by heart, and find myself groaning at Tina Fey and the Interpol vs. CIA joke. The only thing that keeps me interested is the fact that the trailer keeps flashing an image of Tom Hiddleston. So, I still see the movie in its opening weekend.

I had set the bar so low walking in, and was anticipating it being more of the same. The movie starts where the last one leaves off, (literally, it begins with the fireworks in the sky that spell out “The End”), and instantly I am groaning. The camera pans down to show The Muppets, after their last film, dispersing after the large dance number. With our backs to us are two body doubles for Jason Segal and Amy Adams…and they are BAD body doubles. Jason’s is too thin and tall, and Amy’s is too short and has the wrong color hair. If the filmmakers omitted them completely, I don’t think anyone would have noticed. Actually, having their doubles there made it MORE blatantly obvious that these two were not in this movie, and led itself to more of a painful reminder than a realistic depcition. Any hope I had of a good film skyrocketed into the air faster than Gonzo in a cannon.

But then? Redemption. Instantly, a musical number. And in the first sixteen bars is a genius line that saves the entire movie and sets audience expectations. Kermit sings, “And everybody knows that the sequel’s never quite as good.” As he sings this, a brilliant musical number unfolds that is both impressive and visually and musically stimulating. As it goes on, I find myself having quite a lot of fun. Great humor, an INSANE amount of cameos (which I have a feeling is a result of bandwagoning off the success of the first film), fantastic performances by Ricky Gervais, Tina Fey, and Ty Burrell, and incredible music! I loved the first film’s songs. They were classic and witty, and were performed in the style of a musical. While the music in Muppets Most Wanted didn’t feel as much like a musical as its does music just happening at different intervals, I adored every single song, which is more than I could say for the first.

This being said, the film is not without flaw, but then again, no film is perfect. The writing is not quite as solid, there at times seem to be too many characters included without a lot of focus given to just one in particular, and the special effects seem rushed and robotic at times. I also was disappointed by the credits sequence. The first film had a throwback classic Muppet performance, featuring all of the cameos one last time, and it was wildly fun. This one paled in comparison, and seemed extraordinarily…ordinary. I kept waiting for something goofy to happen but…it never came.

The biggest flaw? Marketing. The film has done fairly poor in the box office since it has been released. I think the reason why is because of the “Sequel Phenomenon.” Marketing was scarce on the first film, and its popularity spread based on word of mouth. This film banked on putting it in everyone’s faces, which I think worked to their detriment. I was hesitant to see it at all! The studios can thank Tom Hiddleston for convincing me otherwise (whose role in the film ended up being just as brief as his role in the trailer)!

All in all, I was not disappointed by the movie, I think because I had set the bar SO LOW. It far exceeded my expectations, and I had a wildly good time seeing it. (So much so…that I saw it twice!!)

The Muppets are a great group of talented performers. They’re funny, genuine, emotive, and poignant. And quite honestly, I am glad that the younger me thought I was too old for them.  I was actually too YOUNG for them then. My sense of humor is different now, and their wacky, offbeat, family-friendly, play-on-words, sarcastic humor is far more appealing to a more mature audience. They truly offer something different for everyone.

One thought on “The Muppets + Sequel = Low Expectations”